×
Go to content
Eco Church...
Concern for God's world and our impact on it is one of the hallmarks of being a Christian.
The Parish of Timperley wants to take that commitment seriously by evaluating the ecological impact of the parish and its buildings in order to become an 'Eco-Church'.
By surveying our Worship, Buildings, Land, Community engagement and Lifestyles we can assess what the parish can do to be more responsible good stewards of creation.
More information can be found on the Eco-Church website www.ecochurch.arocha.org.uk
Update July 2021...
Following a survey of both church buildings, both Christ Church and 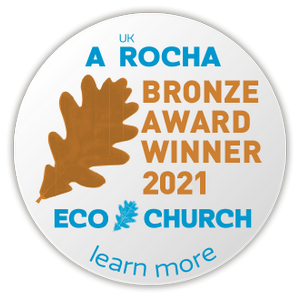 Holy Cross have been awarded Bronze Eco-Church status!
But this isn’t the end – there is still more to do, both as individuals and as a church! One first step is to calculate your own carbon footprint using the link below, and see what you could change to help our world.
www.carbonfootprint.com/calculator.aspx
If you are interested in helping promote and sustain both buildings as Eco-Churches, please contact the Churchwardens.
Update September 2021...
1 in 4 people across the world do not have somewhere safe, private or hygienic to go to the toilet. Toilet twinning raises funds to enable people living in poor communities to have access to clean water, build a toilet and learn about hygiene principles – a vital combination that helps end poverty and fight against disease, especially in the current Covid 19 crisis. 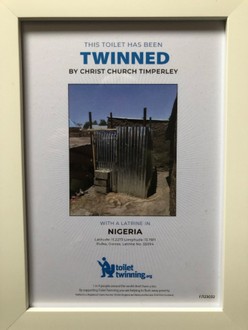 Christ Church is now twinned with a latrine in Nigeria.
To find out more about Toilet Twinning visit toilettwinning.org
and look out for future opportunities to help us twin more.

Update December 2021...
A Rocha UK CEO Andy Atkins comments on the outcomes of COP26 in Glasgow in November:
‘Sadly, COP26 failed to deliver on its two most important objectives: achieving a level of greenhouse gas reduction pledges which would equate with keeping global temperature rise to no more than 1.5 degrees above the pre-industrial average; and delivering on the past promise to provide $100bn a year (by 2020) to help developing countries go green and adapt to climate change.’
However, a majority of countries refuse to give up on getting there. So, significantly,
‘So, what happens now? The lack of decisive breakthroughs on the critical issues of finance and emissions cuts, coupled with agreement to return to them in 2022, adds pressure on wealthier nations, like the UK, to give much greater priority to domestic climate policy and action in the year ahead.
Key for 2022 will be holding the UK government to account for delivering on the commitments it has made at COP26.
All Christians and Churches can play their part in holding the government to its promises. A Rocha UK will be providing our supporters with the means of doing so through our own programmes, such as Wild Christian and Eco Church, and through alliances we are part of. A first collaborative initiative, by the Climate Coalition of which we are a part, is to encourage the public to send the PM a Christmas card asking him to ensure that the promises made at COP26 are kept. You can send your own or add your name online to the giant card which will be delivered to No. 10 Downing Street.’
https://www.theclimatecoalition.org/christmascard